Cycles (1986-90) depict reality as an ever turning circle of life, death, and rebirth, where human and nature, sensuality and spirituality, the sacred and secular unite.

Photos (35mm slides) of the seasons are superimposed over figures of men and women in dance poses from youth to age. The “Life Cycle” shows nudes; the “Death Cycle, mummies from Guanajato, Mexico; and the “Spirit Cycle” “white” shadows of the nudes. Peacocks superimposed over the figures begin each cycle.

Here the static photo figures in the first three cycles are redrawn into a partner dance with each other, the seasons and the elements: “Spring Dances: Water,” “Summer Dances: Fire”, “Fall Dances: Earth,” “Winter Dances: Air.” According to New York City critic,Tony Cavanaugh, they “have a visionary quality like the striving souls of William Blake.”

In “Dances/Seasons” three sculptural crosses represent life, death, and spirit figures, and four totemic triptychs depict the seasons Made by printing photo etchings on taffeta and embossed silk, the figures extend wooden hands or claws as if mouthing their titles: “I Dance with the Seasons” (life), “I am the Seasons Dancing” (death) and “I Dance beyond the Seasons.” 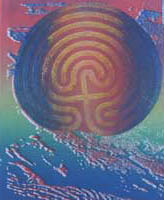 Unlike mazes which have many confusing paths, labyrinths have a single path leads to the center and back, which many find slows the breathing, focuses the mind and induces a peaceful or creative state. As an interactive metaphor for life’s journey, they incorporate all the art series that have gone before. The artist believes she has found the quintessential symbol and that it will last for life.

The “Rainbow Labyrinths Prints and Cards” are photo etchings of the four elements, using new safe methods with ImagOn on copper. They are inspired by what the Indians call “Sun dogs,”the rainbow circle around the sun,a symbol of peace among tribes. The “Rainbow Portable Labyrinths” are made of canvas and are designed to be walked. “Prismatic Labyrinths” make use of prismatic foils and photo transparencies. 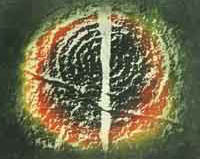 “Spirals, Chaco Canyon, New Mexico,” (1989-2881) (photo etching with ImagOn) is inspired by petroglyphs of humans and animals in Chaco Canyon, New Mexico, especially spiral and sun dagger solstice markers of the ancient Anasazi Indians. (C.1100 A.D.) With this powerful symbol of the sun spiral, the artist attempts to break through their ancient walls, to move above earth and beyond “Cycles,” to a larger cosmology. 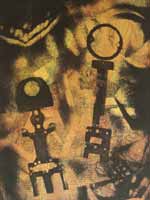 “Totems”, (1973-79) Media: Prints (etchings, lithographs, monotypes) influnced by her life in Brazil, are prints consisting of an “Owl/Snake”series, inspired by the plumed serpent of the Aztecs, as well as a series of “Masks” and “Mechanical Totems” made of machine parts and other found objects.They unite the pre-industrial cultures with our modern one, begin her partner dance with art with technology.